When both types of solar panels, whether they are thermosolar (which heat water) or photovoltaic (which generate energy), are combined with green or cool roofs, the efficiency of the panels increases by 6% due to the higher energy production when the plate temperature is lower. Simultaneously, the plate provides shade on the green roof, reducing stressful conditions and promoting plant diversity.

Thermosolar plates use solar radiation to heat water at a low temperature. This water is intended to be used as hot water or for the heating.

A solar thermal energy installation consists of a set of plates, generally fixed on their three axes, through which tubes run and are thus exposed to solar radiation.

The circuit is completed with either a natural or an artificial circulation system, one or more tanks to decouple consumption from production and the necessary control and driving mechanisms. Usually the system would work in conjunction with the pre-existing gas or electric boiler to complement the action of the sun.

Photovoltaic panels generate energy that can be used at the moment or can be stored in batteries for later use; or it can be injected into the grid. The system is easy to install since it depends on fewer components and is especially recommended in offices, schools or places used during the day.

You can install solar panels just for you or for all the neighbors of the building. Remember that the government grants subsidies for efficient solutions!

What types of solar panels can I install?

The most recommendable ones are the photovoltaic ones that generate electricity. There are 2 standard sizes of 1.7x1m and 2x1m, each with different capacities of solar energy collection.

How many plates do I need to power a home?

This depends on the amount and time of consumption in the dwelling, and the space available to place them. The advisable thing is to do is to round down the average consumption estimate so as not to oversize the installation and throw the surpluses into the network.

How much does an installation cost?

The price is usually below € 2,000 per installed kW (€ 2 per Watt), and it decreases as the size of the installation increases.

Can I have / receive subsidies?

As with green roofs, you can get help from the government. There are also many municipalities that reward solar installations with IBI reductions during the first years prior to their installation.

Yes, since 2019, the solar energy produced can be shared in a proportion that is agreed upon in the neighborhood council and that are usually related to the participation in the investment.

What procedures must be done to install solar panels?

The installer would need to request the warrants before the administration that manages the connection and the change of contracts with the electricity companies. 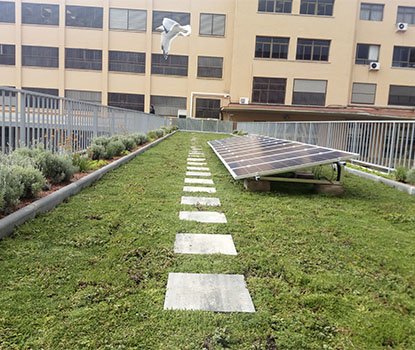 After completing the executive project... 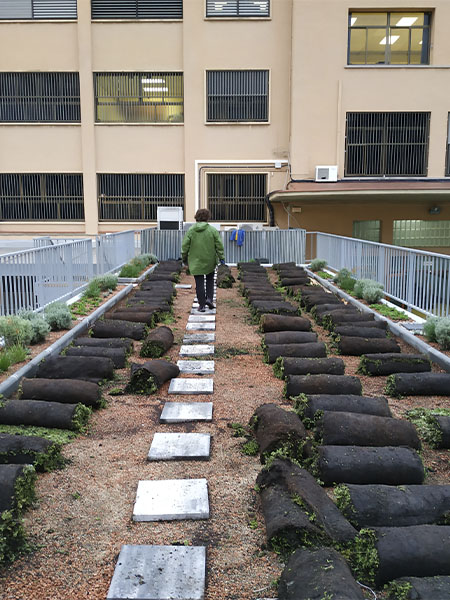 After completing the executive project in July 2018, the implementation of this green roof began in September 2018 and ended in October 2018, becoming the first green roof made for the winners of the green roof contest. We started with some perimeter walls and then we waterproofed the roof. Meanwhile a small structural reinforcement was made as well as all the railings and the new ladder. Then we install the technical layers, irrigation and 10 cm of substrate in the central area and 20 cm in the perimeter. In this case, sedum sod was requested for the central area while aromatic plants were planted around the perimeter.